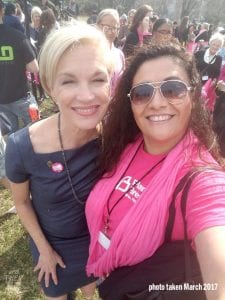 Phoenix, AZ (August 19, 2019) – In a stunning victory for a former Planned Parenthood director in Arizona who was wrongfully terminated after reporting high complication rates for one Doctor, illegal conduct of the doctor, falsification of affidavits and patient records, incomplete abortions, and failure to report a minor who had an adult partner, a jury unanimously awarded Mayra Rodriguez $3 million in damages this past Friday after a two-week trial.

Mayra Rodriguez, who ran three Planned Parenthood clinics in Arizona and worked for the organization for 17 years, sued the non-profit after being wrongfully terminated from her position in October 2017 after repeatedly making claims that Planned Parenthood was endangering the health and safety of their patients.

“When Mayra came to And Then There Were None with her incredible story, I felt solidarity with her, having gone through a similar situation when I worked for Planned Parenthood. Standing with her through the trial and rejoicing in the ultimate victory has been amazing,” said Abby Johnson, a former Planned Parenthood director herself and founder and director of And Then There Were None, a ministry that has helped over 525 abortion workers leave their jobs.

Abby’s and Mayra’s stories have striking similarities. They were both awarded Employee of the Year awards from Planned Parenthood the year before they left. They both were directors of clinics. And they both started working for Planned Parenthood for the same reasons: to help women.

Mayra’s attorney, Tim Casey, based in Phoenix, never asked for any dollar amount during the trial. The damages awarded came directly from the jury, who took three hours to reach their verdict.

Mayra said the most hurtful things said in court were the deception by women she had considered friends and by Planned Parenthood executives themselves, who frequently referred to her as a ‘liar’ due to her undocumented status the entire time she worked at Planned Parenthood.

“Planned Parenthood publicly states they want to help and stand up for immigrants, that they care about these women, but it’s not true. They shamed me for my immigration status,” said Mayra. “But here we are, the jury heard the truth.”